Find all that you're looking for with Bank Forward's

Kendal Sethre was exhausted. She and husband Brandon were doing their best to keep each other going. The days were all blending together, but this must have been the second day in ICU…or was it three? They were still looking for answers to what was making their sweet girl, Quinn, so sick.

It started about four days earlier. Kendal and Brandon knew something wasn’t right even though the doctor sent them home that afternoon. Two-year old Quinn was not herself.

She had these small red dots on her back and neck, a fever, was throwing up, irritable and inconsolable. Sure the strep test came back negative, but something wasn’t right. Brandon took Quinn to the ER while Kendal stayed with their 5 month old daughter Peyton. “He was there an hour, and called telling me I need to get there right away,” Kendal recalls. “The rash was spreading all over.”

Quinn was admitted to the hospital that night. The days ahead included countless tests, lab work, and doctor reports, but no concrete answers.

Now Kendal needed to leave Brandon and Quinn to meet with her co-worker Makell Sahlberg who was coming to the hospital. Having started a new job at Insure Forward just two months earlier and now missing consecutive days of work only added to Kendal’s worries.

“I thought Makell was dropping off a form for me to fill out for HR,” Kendal remembers. Yes, Makell was there but it wasn’t about an HR form and she wasn’t alone. Stacy Rasmusson, Julie DuBois, and Larry Werlinger from the Fargo office were also there.

“I just bawled,” Kendal says as tears fill her eyes. “I was just so overwhelmed that they were all there. I had no idea what was about to happen.”

The group came with a check for the family from Forward Foundation. “I was just ... oh, hysterical,” Kendal says with a smile.

“I couldn’t believe there was this amazing foundation, and they were able to help us like this. Being away from our jobs, mine being a new job, and having no income on top of everything else was so stressful. It was like the weight of the world was lifted off of our shoulders in that moment. We got to be with Quinn, focus on Quinn, be where we needed to be, and do what we needed to do.”

As the doctors continued to monitor Quinn, they determined she had Kawasaki Disease, which is a condition that causes inflammation in the walls of some of the blood vessels in the body.

The disease is most common in children ages 1 to 2 years and there are fewer than 20,000 cases in the US per year. While it is curable, it is important treatment occur quickly to ensure there aren’t lasting effects specifically heart problems.

After two rounds of the prescribed treatment and 10 days in the hospital, Quinn was able to go home and be a normal two year old. An aneurysm on the apex of her heart is the only lasting effect of the Kawasaki Disease. “It is stable,” Kendal adds. “I give her half a baby aspirin everyday and we see the doctor monthly.” Things are returning to normal.

“I’ve never been so excited to go to work,” Kendal recalls with a smile. “Not because it was normal again, and we could get back to a routine, but I was so happy to come back to my work family, and to my friends. There was not one person that I saw that did not ask about Quinn.”

As the weeks passed, Kendal gains a new perspective on her family, being a mom, her career and life in general.

“Everything happens for a reason,” she says. “If I’d been at my other job, they would have been understanding about me being away from work, but there wouldn’t have been financial assistance, which is what gave us the stress relief. It allowed us to breathe and really focus on Quinn, and not worry about those exterior things that needed to get taken care of. It was just unbelievable.”

“These people have changed my life in the best way, but I don’t know if they’ll ever really understand it,” Kendal says of her co-workers and Forward Foundation. “Until you’ve gone through something like that, it is so hard to even understand or fathom. And it’s not just the financial piece, but the support you feel.

“This was the scariest, most vulnerable, darkest time in our life. Yet there was so much light. There were so many blessings, from everybody…in such a terrible time, so much good came out of it.”

Back to All Latest Blogs 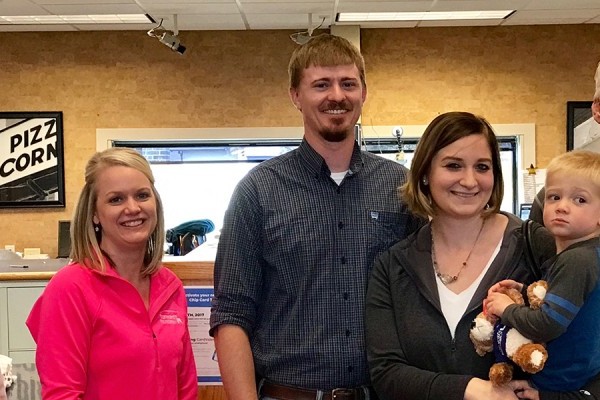